A few days ago, I launched my first “proper” online contest.

I had done a couple of very simple contests before, where I would compile entrants manually and pick winners via random numbers, but this was the first time I created a contest using a dedicated software to do so and with more bells and whistles I’d ever been able to add before.

In this post, I’ll show you all the results I got from running the contest and break down all the lessons I’ve learned from it. Be warned, though: what you’ll read below is probably not what you’re expecting…

If you missed it, here’s a quick overview of what the contest was about:

The prizes up for grabs were:

Anyone could enter the contest and would receive 1 point (or 1 entry) if they opted in with their name and email address and confirmed their email address. In addition, every entrant received a unique sharing link and could earn an additional 10 entries for every person they referred to the contest.

This is all handled by Contest Domination, the platform I used for the contest.

Here are the final stats, after the 5 day contest’s conclusion: 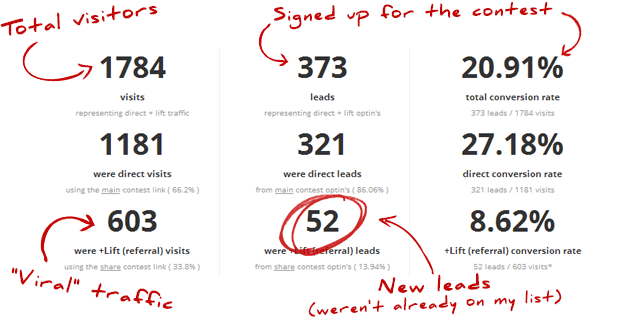 The Numbers Are (Mostly) Low

I noticed that the open rate and CTR of the email I sent for the contest were slightly lower than average. This surprised me, as I assumed that “win something!” would get above-average attention.

The “virality” of the contest was pretty good, on the other hand. Roughly 1,200 visitors generating roughly 600 referral visits is a good result, even though it’s far from a viral “snowball” effect that would be the best case scenario for a contest like this.

The Conversion Numbers Are Extremely Low

Where it all falls apart is the conversion rates: for a focused landing page, 8.62% is an abysmal conversion rate, no matter the traffic source. And 27.2% for direct traffic (e.g. email traffic) is equally shocking. As a comparison, if I send this traffic to a regular squeeze page or a webinar signup page, I’d expect a 50% conversion rate at the very least, with 80%+ not being out of the question.

Ultimately, I gained 52 new leads from the contest. In my business, I’ll get about this many leads if I just sit and wait for two days, without any contests or launches going on.

Clearly, this contest was not a great success, but we shan’t let that keep us from a valuable learning experience.

As mentioned above, the virality of the contest was decent. Of the people that signed up, many actively shared the contest via social media. Here’s a twitter snapshot:

What was it that compelled them to click, but not to enter? 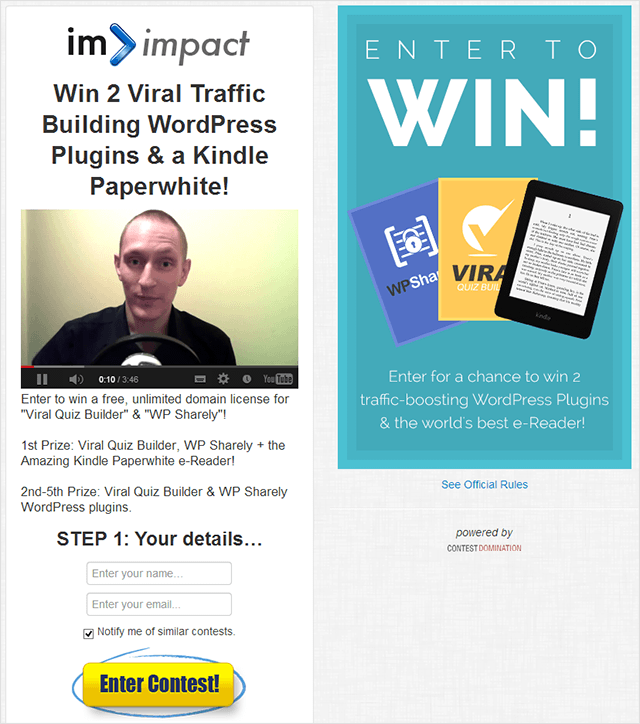 The focal point of the landing page is the video, which auto-plays on page load. It is a relatively short video, selling the merits of the two plugins and explaining how the contest works.

It’s possible that something was wrong with the page. I noticed that the YouTube stats for the video showed only 17 views, throughout the contest. This seems very strange, but even if the video failed to play (and it worked in all of my tests), I’d still expect higher conversion rates.

If two or three lines of text are enough to convince 50% of visitors to sign up for a regular freebie on a squeeze page, why isn’t the same true for a contest like this?

At this point, I can only speculate, but here are some ideas.

When you sign up for a free report or something similar, you receive it instantly and there’s no doubt that you’ll receive it. With the contest, there’s a possible factor of the “what’s the point, I won’t win anyway!” objection coming into play.

In the case of my contest, that might go something like this: “there are only five prizes up for grabs? I bet millions of people have already entered this contest, so there’s no chance I’ll win.”

Possible remedies for this are:

The likelihood of winning and the value of winning are weighed against each other, for a contest. If the chances are far lower, but the value far greater, you might still enter (see: lottery, where you’ll never win, but if you did, you’d win big).

So, perhaps giving away something worth multiple thousand Dollars would help?

The main issue with this is that the prizes are a way of filtering leads. Sure, you can give away a Macbook, a car or a house, but then you’ll simply attract everyone to your contest. I chose to give away WordPress plugins and a Kindle, because those are prizes that appeal to my specific target demographic. If I get leads from people who want a new Macbook, but don’t own an online business and don’t read, they’re basically useless leads, to me.

The other side of the balance can be addressed with the volume of prizes. What if there weren’t only 5 prizes, but 500? Or 5,000?

A large volume of prizes would eliminate the “I’m not going to win anyway” objection.

With a large volume of prizes, there’s a new value problem. I can’t afford to give away hundreds or thousands of prizes, unless the cost to me is very low. But if the cost to me is low, the value o the prize is probably low and no one wants to win junk. To make this work, you’d have to find something that’s low-cost for you, but high value for your visitors.

What if you combined a free report and a contest?

This might be a way of combining better opt-in rates (as seen on typical squeeze pages) with the viral factor of the contest.

The main issue here is that you have to create a good freebie to go along with the prizes you’re giving away. A potential problem could also be that the message gets diluted,  if you’re advertising the opt-in and the contest at the same time. Visitors might get confused about what exactly they’re signing up for, making the campaign less effective, overall.

In addition, creating two incentives and using Sharely on the thank-you page of your opt-in is a much easier way to generate a similar viral sharing effect. The contest option would have to have a significant edge over this combination, to be worth it. 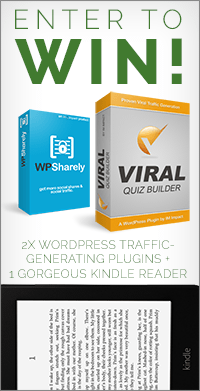 Maybe my landing page just sucked. That is possible and it’s also a bit of an embarrassment, since I’m supposed to be good at this kind of thing. Then again, no one’s ever become good at something without being bad at it, first.

I’m not sure about the two-column layout, which is the standard Contest Domination layout and maybe I should have removed the logo from the top left. Also, I briefly changed the image on the right side (to the one next to this text, right here). The idea was to display the prizes in a more tangible way.

I couldn’t see any difference in conversions, though. It was a pretty futile attempt anyway, because unless I could do a proper split test, the results would always be questionable. So, dear Contest Domination: add split testing, pretty please?*

The most notable positive result I got from the contest was an increase in social media followers. My Twitter followers went from 962 to 1,048 and my Facebook page went from 779 to 829 likes, during the course of the contest.

This contest didn’t perform very well, but that didn’t come as a big surprise to me.

Sure, I expected higher conversion rates and I hoped for a better result. But pretty much everything I’ve ever accomplished started  with an early attempt that failed. What the results from this case study show me is that I’m not good at running profitable contests… yet.

My plan is to run at least another two contests, changing a few variables each time. As long as I keep the cost of the contests in check, it’s something worth experimenting with, to see if I can figure this thing out.

As usual, I’ll be reporting what I learn here, so you can avoid my costly mistakes.

As for this particular post, here’s what I’d like you to keep in mind: I have a history of trying things, failing at them and then keeping at them until I succeed. In this post, I’ve laid bare my entire thought process that happened after this initial failure. Even if you don’t care about contests, I can guarantee you that this way of thinking is useful for your own business venture.

Thoughts, questions, feedback? Leave a comment below and I’ll be happy to reply.

*Lack of split testing is the only thing I an criticize about the software, so far. I definitely can’t blame Contest Domination, since the software did what it’s supposed to do and was very easy to use, as well.