Recently, Google rolled out a new “tabs” feature for Gmail users. Your email now gets automatically sorted into several categories like “promotions”, “social” or “forums”.

From reactions I’ve seen so far, for everyone who likes the feature, there seem to be at least 10 people who hate it (and I’m among them).

In this post, we’ll look at how you can improve Gmail sorting or get rid of the tabs altogether. Also, we’ll take a look at how this change affects email marketing and what you should do, if you have a mailing list.

How to Remove the Gmail Tabs

As you can see, it’s luckily very easy to remove the tabs completely. For me personally, Gmail did a terrible job of automatically sorting the emails and the tabs made me hate my inbox 100x more than I already did. It put me in a situation where even if I’d cleared up an inbox, there were still more inboxes I had to go through and made the task much more daunting. I had to get rid of the tabs, otherwise I wouldn’t even log in to my account anymore.

How to “Train” the Gmail Sorting Feature

If you want to keep the tabs, this is a move you need to know about. Gmail will inevitably get some of the sorting wrong. With simple drag-and-drop, you can make sure that important emails go to your main inbox.

If you do any kind of email marketing, an important question is: how does this change affect your results? Do you have to expect a drop in responsiveness from your subscribers?

The short answer is: yes.

MailChimp have published some data from their service in this post: 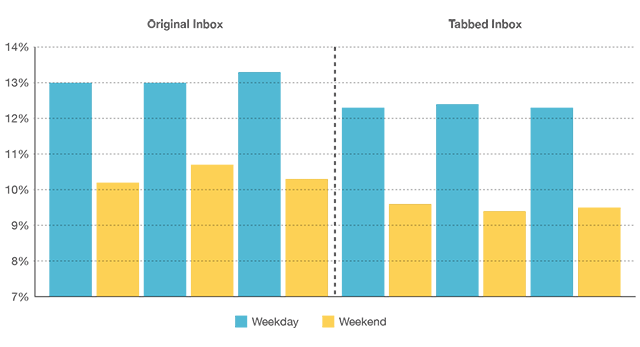 There’s a lot of speculation around, but the above is the only hard data I’ve found on the topic, so far.

A post published on the Infusionsoft blog makes a valid point in saying that:

…your emails will now have less competition in the Promotional folder to capture your recipient’s attention.

If you are sending marketing emails, you have to assume that they end up in the promotional folder, in many cases. The benefits and drawbacks are a bit of a toss-up. On the one hand, it’s true that there are fewer total messages in that folder, so your messages might not get overlooked as often. On the other hand, any message in the promotions folder will automatically have a lower perceived value than a message in the primary inbox.

So far, based on the MailChimp data, we can say that there’s a clear, but not catastrophic reduction in open rates, caused by the Gmail change.

What to Do, As an Email Marketer

So, how can you minimize the damage that this change could have on your email marketing campaigns? I recommend you take two steps:

Let your subscribers know the two things you found at the top of this post. Tell them how they can make sure your emails go to the primary inbox. Also tell them how to get rid of the tabs. Again, from the reactions I’ve seen so far, there seems to be quite a lot of people who don’t like the tabs at all, so they’ll be happy to learn about this.

Yes, I know that’s basically a platitude. You can’t deny it’s true, though. This new change to Gmail inboxes is really bad news for marketers who have “churn and burn” email lists and just keep flooding subscribers with promotions or lifeless, corporate email updates. It’s much less of a problem for anyone who cultivates a true fan base and communicates with on a real, personal level.

To take it a step further, this change makes it all the more important to have a strong voice, no matter what your company is. If you put a bland, politically correct and replaceable message in the primary inbox, there’s a certain chance it will be read and acted upon. If you put that same message in the promotions tab, along with countless other bland, replaceable messages, it will probably get ignored.

Communicate in a way that appeals to and resonates with a small group of the right kind of people. For your true fans, tabs or any other update will not dissuade them from seeking you out, paying attention to you and yes, buying your stuff.

What’s your take on the Gmail tabs? Love them? Hate them? Seen an effect on open rates? Let me know in the comments below!

P.S.: Shoutout to Insider member Mitro for the idea of using animated gifs as a simple way to illustrate the steps above.