My goal is to write a full, detailed review of ActiveCampaign and other email marketing systems like it. For now, I want to give you a quick-but-useful comparison between Infusionsoft (what I used before) and ActiveCampaign (what I use now).

What both of these solutions have in common is that they are more than just autoresponder systems. A simple autoresponder is something like Aweber or MailChimp, where the idea is that you can do 2 things:

Infusionsoft and ActiveCampaign both go beyond this kind of functionality and in the direction of marketing automation. In practice, that means you can do things like:

In Infusionsoft, this is called a "Campaign" and here's an example of what it can look like:

In ActiveCampaign, this same kind of thing is called an "Automation" and here's what it can look like: 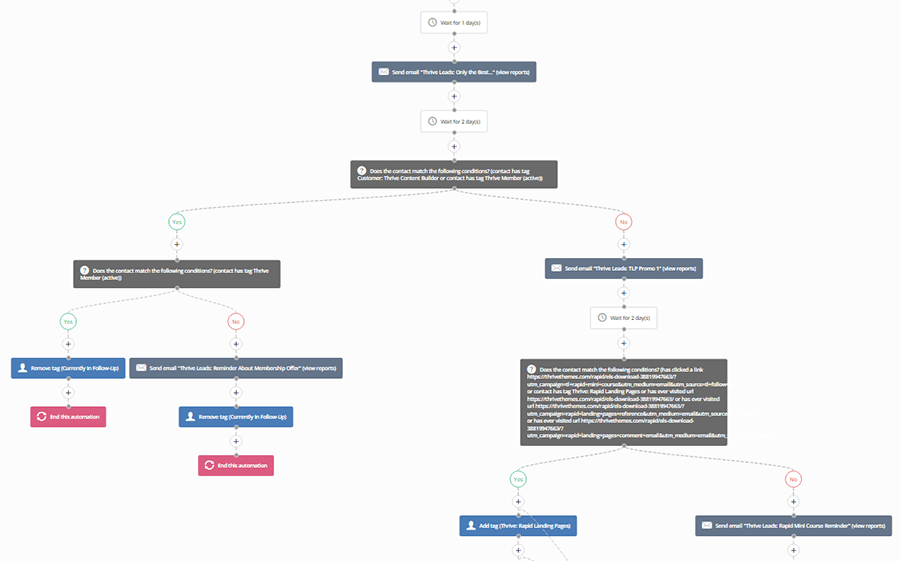 While there are many differences in the details and features between Infusionsoft and ActiveCampaign, the most important thing to note is this:

For the purposes of most email marketers and product or service vendors, both of these systems do all the things you need them to do.

​That is to say that in theory, both of these systems are very similar to each other. However, in practice, I've found some glaring differences:

What I've found is that Infusionsoft has many features that I never want to use, while ActiveCampaign has fewer features, but I actually make use of them.

For myself and for anyone who does email marketing, the campaign/automation building aspect of these tools is the most important component. Here's an example that perfectly illustrates why I made the switch:

In Infusionsoft, building campaigns is a slow and cumbersome process. One of the issues is that their built-in email confirmation process is absolutely horrible and doesn't allow custom thank-you pages. Because of that, you need to invest extra time to build a workaround confirmation process for every lead generation campaign you create.​

What's worse: making any changes to an existing campaign is very difficult.

You can always add more steps to the end of an existing campaign, but making changes within a campaign... not so much.

If you have a series of emails and you want to insert a new step in between them, you have to delete all the steps back to the point where you want to make the change, then insert the new step, then rebuild the rest of the sequence. (I was recently told that it should be possible to insert steps, but even with further instructions, it only worked occasionally. Either way, this is something that never worked properly for me.)

Again, there is a clumsy workaround that mitigates this problem to some degree, but it's never as convenient as it should be.

​In ActiveCampaign, the automation builder has never caused a serious problem for me. I've been able to build campaigns the way I want to, I have control over the email confirmation process etc.

​And inserting new steps within a campaign is just as easy as adding a new step to the end of one. As a result, you can use a "lean" approach to building your campaigns: you can start with something simple and publish it right away and then gradually build it out with new steps.

For me, this is huge.

In practice, the difference between how user friendly these two solutions are comes down to this: in Infusionsoft, I never built out highly complex campaigns because it was too much of a headache to do so. And the longer I used it, the simpler my campaigns became, because I just couldn't be bothered.

In ActiveCampaign, I have built more and more complex automations in the few months I've used it so far than I did in the years of using Infusionsoft.​

Not a Review, But a Recommendation

If you know my style, you know that what's on this page is nowhere near what I'd consider a full review of either of these options. And a full review will (hopefully) follow sometime soon.

Also, let me be clear that ActiveCampaign is not a perfect product. Like anything, it has its pros and cons.

However, I am comfortable recommending ActiveCampaign at this point and here's the reason why:

Good follow-up marketing can have a MASSIVE impact on your business' bottom line. It's almost impossible to overstate how valuable good follow-up can be. And ActiveCampaign is a system that not only has the features to create advanced follow-up automations, it's also easy and fast to use. That means you'll spend more time doing valuable marketing work and less time wrestling with annoying software.​

P.S.: If you have any questions about this, please post them here.